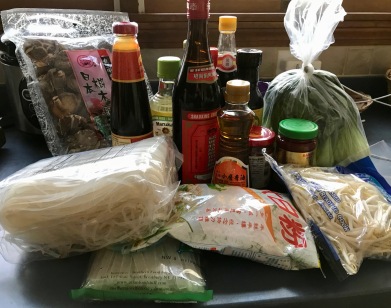 It’s been a week centered around food. New Year’s Day found us at an Asian market with its dizzying display of unfamiliar riches. Spent a happy hour replenishing my stock of condiments, delighting in fresh baby Bok Choy, and eyeing the live eels with wonderment that someone would actually consider them food. But I guess one could feel the same way about lobster. A big aquatic bug could be daunting to the uninitiated.

With a classic New Year’s goal of dropping a few pounds and lowering blood sugar, we set out on low carb journey. This involved renewed emphasis on vegetables, so the Spiralizer was removed from the closet and dusted off. I guess the big discovery of the week for me was cauliflower rice.

The technique of turning cauliflower into “rice” has been part of food blogs for a long time, but I had never tried it until this week. Couldn’t be simpler. Chop cauliflower florets in a food processor until they resemble grains of rice. Using a skillet with a cover, saute the rice-like grains in a tiny bit of olive oil and/or chicken broth. Cover and let steam for a few minutes until tender. Season with salt. Great as a side dish instead of rice or potatoes, or as a base for stir fry.

And so the new year begins the way the old year ended, with me in the kitchen. Not a bad place to be. At least for me.