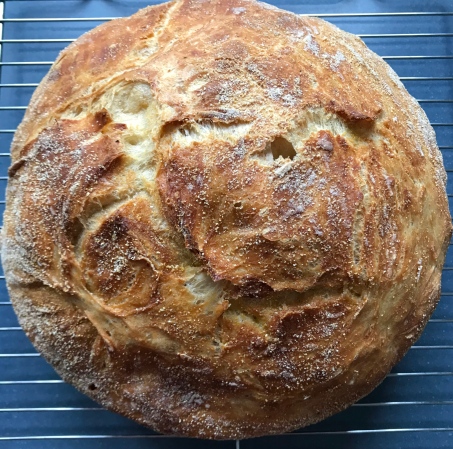 I read an article recently about the advantages of slow fermentation during the process of baking bread. A slow rise contributes not only to better flavor, but also to increased nutrition. This caused me to think about the fact that I’ve been taking short cuts for years, and it was time to get back to some original roots.

When Mark Bittman first published Jim Lahey’s technique for no-knead bread in the New York Times in 2006, bread bakers and non-bread bakers alike jumped on the band wagon with wild enthusiasm. The Lahey technique involves using a tiny amount of yeast and a 12-18 hour fermentation process, but, as the name indicates, no kneading. The complete process is fully explained on line.

Many variations followed. A whole industry of bread books mushroomed. The technique I’ve adopted over the years involves more yeast, a two hour initial rise, and an overnight rise in the refrigerator. It works well. The thing is, I made the original recipe the other day, and found the flavor to be more pronounced, and the crust darker and richer with a delightful crunch. So, at least for no-knead bread, I plan to go back to basics.