One Pot or Pan Meals 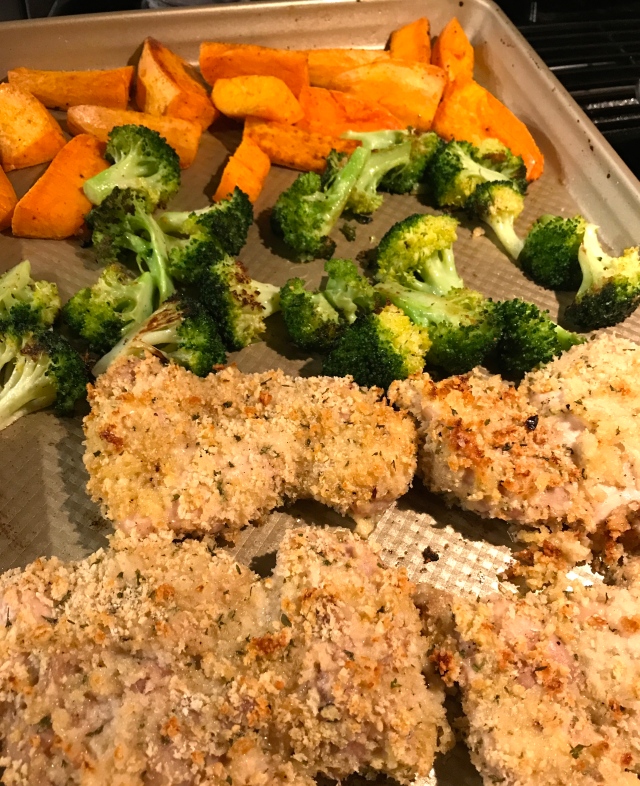 I’m a huge fan of one pot meals. That becomes even more true as the cooler weather sets in and the grill loses its appeal. Braises rank high on my list, along with soups and stews. Paella has been a recent addition. But the simple sturdy half sheet pan has been playing a starring role recently.

There are a few tricks to sheet pan cooking that make for ease of use and great results. First of all, things cook at different rates. Avoid any recipe that tells you to put meat and vegetables on the pan at the same time and put it in the oven. Rarely, if ever, works.

Another tip is to cook at a high temperature (425) and start with a hot pan. Put the sheet pan in the oven while you’re pre-heating and prepping your meat. Obviously, be careful and remember that it’s hot, but putting meat or vegetables on a hot pan starts the cooking immediately. I like to rub a little olive oil on the hot pan before placing the meat. Tongs and a paper towel work well to spread a light layer of oil.

Pictured is a meal of breaded boneless chicken thighs, sweet potatoes and broccoli. I dipped the thighs in an egg wash and coated them with seasoned Panko crumbs. They went on the hot pan first, drizzled with a bit of olive oil.

After about 10 minutes, I tuned the chicken over and added a sweet potato that I had peeled and cut into wedges. I also tossed the pieces with a tiny amount of olive oil, salt and pepper, and some garlic powder. You can use any additional herbs that you like.

After about 10 more minutes, I tossed the sweet potatoes around and added the broccoli. Same deal. A bit of olive oil, salt and pepper.

In about a half hour, we had a complete meal for two on one half sheet pan. Timing would have to be increased if you were cooking chicken on the bone.