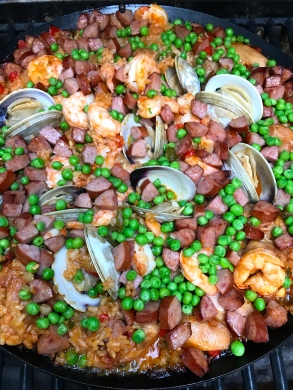 Talk about a birthday gift that has opened new doors! My learning curve as a result of my new paella pan has carried me through a cultural history of paella, and a study of various authentic recipes. The recipe I settled on for my first attempt, America’s Test Kitchen’s “Paella on the Grill”, while not as authentic as others I’ve studied, promotes cooking on an outdoor grill.

The outdoor grill aspect appealed to me. From everything I’ve read, it seems that paella was traditionally cooked on an outside flame. The romance of the presentation struck a cord as well. The communal gathering around a shared pan seemed perfect for a convivial dinner party. Our gathering fortunately included very close friends since I was in research mode. When I saw Peter scoop an example of perfect socarrat (crispy crust that forms on the bottom of the pan), I found myself saying, “Don’t eat that!” as I raced to grab my phone to snap a picture.

Paella is perfect in more ways than I can count. It’s a flexible dish. You can scale it up or down depending on the number of people in the group, and you can decide what ingredients to include. I used chicken, shrimp, cherrystones, and kielbasa. The key is to be sure that the rice to liquid ratio remains constant.

While I based my technique on the America’s Test Kitchen recipe, I adapted it to include ideas from other sources. Most authentic recipes included chopped green bell peppers, so I opted for a combination of fresh green and red peppers instead of the jarred red peppers in the recipe. I also took a clue from a source that suggested prepping many of the ingredients (i.e., chicken, sautéed onions, peppers,) in the kitchen. I also chose to include a full pound of smaller shrimp (26-30 count) and added them much later in the cooking process.

Rice is the critical issue. I used authentic Calasparra rice that can be ordered from Amazon, but Arborio was used in the America’s Test Kitchen recipe and is readily available in any market.

It was fun to cook everything in one big round pan outside on the grill while we had drinks and appetizers. Another thing I learned from my research is that the rule is that people wait for paella. Paella waits for no one. The trick is to get everyone settled with their salads and wine around the table. Only then is the hot pan brought to the table and settled with a satisfying thump on a thick chopping block in the middle. Hot pads on the handles are a good reminder that the pan is hot! Everyone is now free to dig in, making sure to scrape up the beautiful socarrat from the bottom.

I am a retired English teacher. My husband, Frank, and I have lived on Cape Cod since 2000. I am a lifelong bread baker and writer and have been posting a blog on Falmouth Patch for the last few years. Savory Seasons has been largely devoted to recipes and food in general. I am hoping to expand my focus in this new blog.
View all posts by Mary Jane →
This entry was posted in General Musing, recipe. Bookmark the permalink.