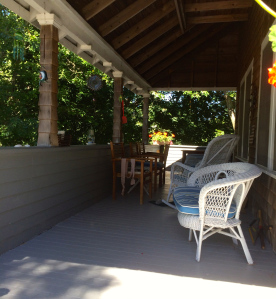 The porch was empty yesterday when we made a visit to say farewell, but in my memory, it will always be summer. The breeze will be soft and the laughter of familiar voices will bounce off the walls.

A few years ago, I wrote a blog entry about our group of close friends gathering for a joint “birthdays” dinner. I mused at the time about the fact that we look at one another with eyes clouded by years of shared memories. Almost fifty years have passed since college graduation. A cruise is being planned to mark the event. Who would have thought that the young people we once were would have thought that a cruise would be a great idea!

My friends and I once looked at the older alums returning for reunions in “mink stoles and flowered hats” and considered them antiques. We would never be that old. Well, big surprise. Here we are. Perhaps the mink stoles and flowered hats have faded into the past, but when I look at Joan, I see a girl I once shared “post-mortems” with, late at night sitting crossed legged on the floor rehashing Saturday night dates. When I have lunch with college friends,  I don’t see wrinkles and the need for glasses to read a menu. I see faces that shared my dreams for a future that had yet to unfold.

In an old movie titled Lovers and Other Strangers, there’s a line that I still remember referring to a number of couples who, in spite of all obstacles, were “still together.” As a group, we are fortunate to be “still together.” I found myself looking at my husband and his friend, Peter, last night. The dorm is a distant memory, but the bonds forged there have survived a half century. They still laugh at the same things and care deeply about one another’s happiness and well being.

Cape memories came tumbling back today as we stood on the porch of the cottage for the last time.  Most poignant for the guys who started their journey at BC together and spent summer days at Peter’s family cottage. Wives and children were added to the mix as time went on, but the cottage remained a constant. The cottage is passing into other hands, but that’s okay. Perhaps it’s simply time for new voices, and new memories to be made on that porch.

As things change, much remains the same. Peter and Janet will be full-timers on the Cape in their new home. I half joked about the fact that it was becoming more important for us to live in close proximity so we could drive one another to the doctor, but it’s not that far from the truth. Routine appointments and tests that end with a smile and a “See you next year.” seem like a reprieve.

But for now, life remains busy and full of the promise of new adventures just over the horizon.