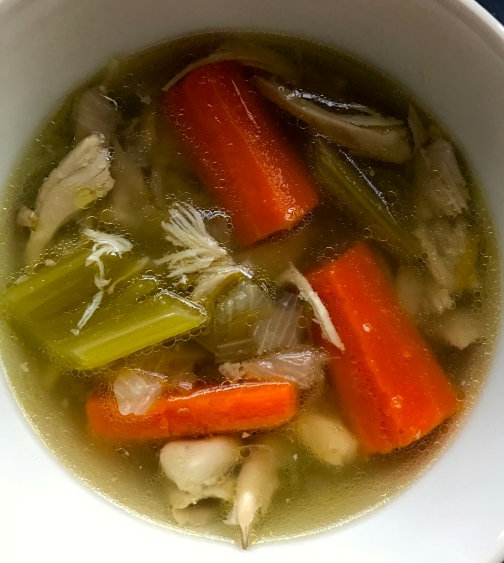 I made chicken soup the old fashioned way with chicken on the bone and water. A few carrots, stalks of celery and a couple of onions. Salt, pepper, a little dill weed. Bring to a boil; skim the layer of scum that rises to the top. Turn down the heat and set to a slow simmer on the back of the stove for a few hours.

After about an hour, I removed the chicken pieces (thighs and legs.) When they were cool enough to handle, I removed the meat and set it aside. I returned the bones to the pot to enhance the flavor and let the soup continue to simmer for another hour or two. Bones removed, meat shredded and returned to the pot, noodles (cooked separately) added once the soup was cooked.

This should not have been such a novelty. Across cultural lines and for generations, soup has been made with water. Its flavor drawn from whatever ingredients were incorporated into the soup. I had fallen into the habit of using commercially prepared stock as a base. Prepared stock saves time to be sure, but it can’t compete with the flavor of slowly simmered soup with a simple water base.

Funny how the old ways are often the best ways after all.

I am a retired English teacher. My husband, Frank, and I have lived on Cape Cod since 2000. I am a lifelong bread baker and writer and have been posting a blog on Falmouth Patch for the last few years. Savory Seasons has been largely devoted to recipes and food in general. I am hoping to expand my focus in this new blog.
View all posts by Mary Jane →
This entry was posted in General Musing, recipe. Bookmark the permalink.