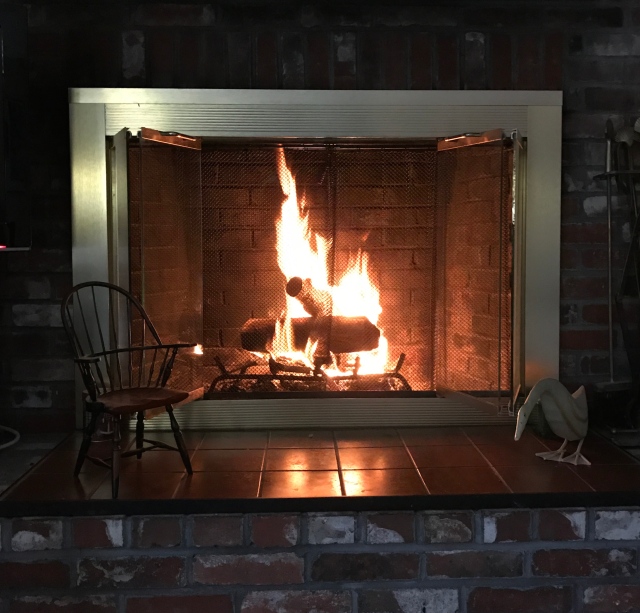 2 January 2017 is logical New Year’s Day since 1 January fell on a Sunday this year. A bonus day to settle and assess after disembarking from the runaway train that carried us through the holidays.

Reading by the fire. Not a bad way to usher in a new year. Finding myself more and more attracted to our fireside. Becoming routine to gather scraps of lumber from Frank’s workshop for kindling, crumple old newspapers and throw on a couple of logs before settling down to read.

Partially a nesting instinct, I’m sure. Avoidance of political news is now routine. Quite a reversal for one who avidly followed events. Burying my head in the sand (or in a book by the fireside) won’t reverse the outcome of the presidential election or stop distressing future events from unfolding, but I still need time to at least attempt to process the situation in this country that produced our current state of affairs.

Winter is a good time for fireside introspection. But time and life have a way of marching on. Perhaps it’s a good thing that we have Daisy to force us to bundle into hats and gloves and boots (love my UGGS!) and head out the door for a daily walk. Left to my own devices, I’d probably settle for the treadmill in the basement. Even I have to admit that, in spite of the cold, outside is better.

Thinking of Mary Oliver’s words from “November,” in Why I Wake Early:

Through the window
we could see
how far away it was to the gates of April.
Let the fire now
put on its red hat
and sing to us.

I am a retired English teacher. My husband, Frank, and I have lived on Cape Cod since 2000. I am a lifelong bread baker and writer and have been posting a blog on Falmouth Patch for the last few years. Savory Seasons has been largely devoted to recipes and food in general. I am hoping to expand my focus in this new blog.
View all posts by Mary Jane →
This entry was posted in General Musing, Poetry. Bookmark the permalink.