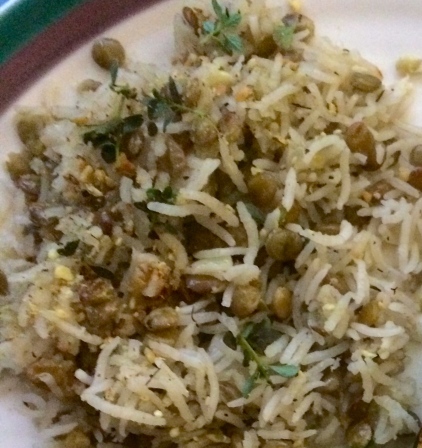 Lentils and rice are an inspired combination. I’ve been intrigued by a recipe in the cookbook, Jerusalem, for a while now, but have been put off by the inclusion of cumin and coriander, two of my least favorite spices. Then it occurred to me that I could combine the lentils and basmati rice as a base, and use spices or herbs of my own choosing. Total winner!

Then there was a recipe in Ottolenghi’s Plenty that included a buttermilk and Greek yogurt sauce. The recipe itself was a bit more complicated than I wanted to deal with, but the sauce was simple and looked like it would be great over roasted vegetables. It was!

A sprinkle of dukkah ( an increasingly popular Egyptian blend of toasted nuts, seeds and spices) over the lentils and rice and/or the roasted vegetables and yogurt sauce elevates either dish. Fresh thyme leaves add a finishing touch.

1. Pour boiling water over the lentils and let sit for at least 15 minutes. Drain and set aside.
2. Rinse the rice until water runs clear. Drain and set aside.
3. Saute the diced onion in about a tablespoon of olive oil. Add the garlic once the onion starts to soften. Season with salt, pepper, a sprinkle of red pepper flakes and dried thyme.
4. Once the onion has softened, add the lentils to the pan. Stir to coat with the onions and oil. Then add the rice. Stir to coat the rice as well.
5. At this point, I transferred the mixture to my rice cooker; added 2 cups of broth and set the timer for white rice. Without a rice cooker, add the broth, bring to a boil. Cover and simmer for about 15 minutes until the liquid is absorbed.
6. Serve sprinkled with dukkah and/or fresh thyme leaves.

1. Whisk ingredients together. Chill until ready to use.
2. Drizzle over roasted vegetables. I used zucchini and eggplant. Sprinkle with dukkah and/or fresh thyme leaves.
3. Also good drizzled over the lentils and rice.

We had the above recipes as side dishes to roast chicken. I was so happy with the sides that I set the chicken aside for lunch the next day. Frank liked the sauce so much that he put it on the chicken as well.

I am a retired English teacher. My husband, Frank, and I have lived on Cape Cod since 2000. I am a lifelong bread baker and writer and have been posting a blog on Falmouth Patch for the last few years. Savory Seasons has been largely devoted to recipes and food in general. I am hoping to expand my focus in this new blog.
View all posts by Mary Jane →
This entry was posted in recipe. Bookmark the permalink.