Sausages and Peppers Over Mashed Potatoes 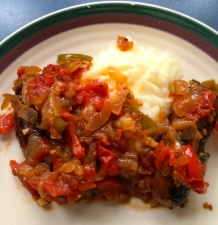 Italian sausages and peppers are a treat under most circumstances. They are often served on a crusty bun. Having them as part of a cookout, outside on a summer day, with grease dribbling down your chin is a fun part of the season.

The weather wasn’t great last night, so we planned to eat indoors. Frank suggested that we have the sausages and peppers with mashed potatoes. I must admit that I was a little skeptical at first, but one taste made me a convert. We will definitely have this again!

Basic Method:
Amounts depend on number of people served.

I am a retired English teacher. My husband, Frank, and I have lived on Cape Cod since 2000. I am a lifelong bread baker and writer and have been posting a blog on Falmouth Patch for the last few years. Savory Seasons has been largely devoted to recipes and food in general. I am hoping to expand my focus in this new blog.
View all posts by Mary Jane →
This entry was posted in recipe. Bookmark the permalink.