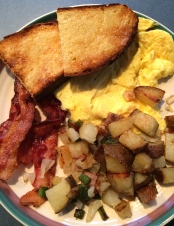 Frank makes himself breakfast every morning. He doesn’t exactly whistle while he works, but he does exude a happy little aura as he toasts his bread and fries his eggs.

It makes his day when there’s a leftover baked potato in the frig that he can turn into fried potatoes with onions and peppers. He’s a true breakfast guru who takes pride in his omelets stuffed with spinach and feta and onions.

Sometimes, he’ll assemble his breakfast and comment that he likes being retired. I’ve come to appreciate that this breakfast ritual is a symbol of freedom to him. It’s a relaxed start to a day that no longer includes conference calls and airports.

He’s free to decide what to do with his day. Well, at least until Daisy rests her head on his knee and lets him know that she’s ready for a morning walk.