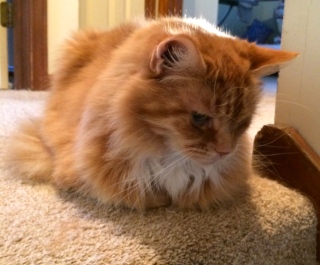 Sam is not happy. We’re not that happy either, given that the furry little guy has been doing more than his share of howling lately.

His buddy, Daisy, has spent the last two nights at the kennel because we weren’t home for Thanksgiving. Her little sojourn had to begin a day early because the kennel is closed on Thanksgiving Day. She’ll be home this morning, but Sam doesn’t seem to understand my repeated assurances.

He’s been running into the office where Daisy sleeps and sitting on her bed. He seems to have given up hope. Now, he’s just sitting at the top of the stairs with a sad expression on his face.

We’ve notice lately that Sam and Daisy rarely leave one another’s side when we’re all home, but it didn’t occur to me that he would be so bothered by her absence.

Animals have a strong sense of family. They need closeness and affection as much as food and water. And Sam seems to need Daisy even more than he needs us.

She’ll be home shortly, and will spend the rest of the day sleeping off the effects of the kennel. Her little friend, Sam, will be glued to her side.

I am a retired English teacher. My husband, Frank, and I have lived on Cape Cod since 2000. I am a lifelong bread baker and writer and have been posting a blog on Falmouth Patch for the last few years. Savory Seasons has been largely devoted to recipes and food in general. I am hoping to expand my focus in this new blog.
View all posts by Mary Jane →
This entry was posted in Sam. Bookmark the permalink.