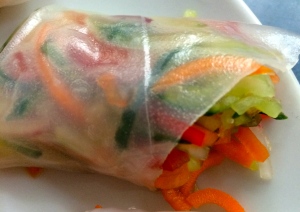 Spent part of yesterday playing with rice paper wraps. When we go to a Thai restaurant, I invariably order the fresh rolls wrapped in rice paper, so I decided to try making them at home using spiralized vegetables. It was a little tricky in that we don’t have an Oriental market here on the cape, so I had to order the rice paper from Amazon.

I looked at a few recipes in cookbooks and on line. Basically, any combination of very thinly sliced crunchy vegetables can be the filling. Sliced shrimp and rice noodles are often included, as are whole herbs. For my initial attempt, I opted for spiralized vegetables.

Using the “spaghetti” blade, I spiralized a carrot, a few radishes, and an English cucumber, and then chopped them into smaller pieces. Using the slicer blade, I spiralized a red bell pepper, and then chopped that a bit more as well. I then added a couple of chopped scallions to the mix, and put all of the vegetables in a colander, sprinkled them with a bit of salt and set them aside to drain. It’s important to squeeze them out and blot with paper towels before rolling in the rice paper.

There are recipes for peanut sauce on line. Basically anything that includes peanut butter, lime juice, Sriracha, soy sauce, sesame oil and a little honey can’t be bad. I improvised. There are also recipes for sweet/sour vinegar based sauces that I might look at more closely for another day.

For a first attempt, these were pretty good. I will definitely make them again. When I do, I’ll attempt to post an actually recipe. I like the idea of including shrimp, rice noodles, and Thai basil. Besides, I have two packages of rice noodles that need to be used!

Goal for today: get to the beach! Summer is taking flight, and I have yet to get in the water at Old Silver.

I am a retired English teacher. My husband, Frank, and I have lived on Cape Cod since 2000. I am a lifelong bread baker and writer and have been posting a blog on Falmouth Patch for the last few years. Savory Seasons has been largely devoted to recipes and food in general. I am hoping to expand my focus in this new blog.
View all posts by Mary Jane →
This entry was posted in Spiralized. Bookmark the permalink.