Talk about the winter that won’t quit. More snow on the way. Much more snow on the other side of the bridge. We’re scheduled to mix with freezing rain here on the Cape, resulting in less snow, but a coating of ice. Not sure what’s worse. I read an article that the local hospital is gearing up for a rash of “slip and fall” injuries.

February is way too early to start craving Spring, but as I was pulling on boots and cramming my hat under a hood just to take Daisy for a neighborhood walk, a little refrain, “summertime and the living is easy,” kept running through my head. So ready to head out the door in shorts and a t-shirt, instead of being bundled up like Ralphie’s little brother, Randy, in The Christmas Story. Oh well, this too shall pass. 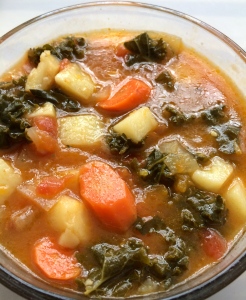 I sat down at the computer to write a blog about soup that I made from the leftovers from spiralizing. Made the mistake of checking the weather. That sent me off in another direction. Back to the soup.

Someone asked me if I was still spiralizing. Definitely, yes. It’s actually become pretty routine. I plan to sauté a combination of zucchini and carrots as a vegetable for dinner tonight. We had a veggie crostata last night. Whenever I spiralize, I save the skinny ends and flat disks that are too close to the blade to cut, and the bulb end of a butternut squash.

Today, I chopped up my leftovers from the last few days and sautéed them, along with a chopped onion, in a bit of olive oil. I added a quart of chicken stock, and a can of diced tomatoes and let everything simmer until the veggies were soft. Next, I added chopped kale and about a quarter of a pound of diced kielbasa to the pot.

Never willing to leave something that might work out of a soup pot, I added about a third of a can of leftover pumpkin. I’m amazed by how many recipes call for a cup of pumpkin. Then you’re left with the rest of a 15 oz. can. My leftover pumpkin usually ends up in soup. Finally, I added a couple of teaspoons of pesto that was left over from last night’s crostata.

Creating something warm and wonderful out of random leftovers is worth a smile even during this endless winter.

I am a retired English teacher. My husband, Frank, and I have lived on Cape Cod since 2000. I am a lifelong bread baker and writer and have been posting a blog on Falmouth Patch for the last few years. Savory Seasons has been largely devoted to recipes and food in general. I am hoping to expand my focus in this new blog.
View all posts by Mary Jane →
This entry was posted in Spiralized. Bookmark the permalink.