We have power. My computer is humming along. The state, however, is in lockdown. The governor declared a State of Emergency yesterday that doesn’t look like it’s going to be lifted anytime soon. With good reason. There are parts of the state buried under three feet of snow. Banning all but emergency vehicles from the roads may be the saving factor to getting back to normalcy in a reasonable time.

Here on the Cape, wind is a factor. Our actual snow levels are more in the one foot range, but the winds are wild, and there has been a lot of drifting. The wind direction has been punishing the Cape Cod Bay side rather than our Buzzard Bay facing area. All of the news reports have been focused on Sandwich with icy seas splashing over roads. The reports are making the Cape sound like a war zone, causing us to get a lot of emails and phone calls checking on us. We’ve been lucky. Perhaps I shouldn’t speak so soon. The winds are still howling, and snow continues to swirl. 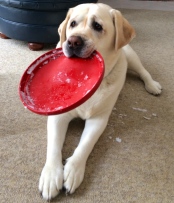 Daisy is happy. Letting her get some exercise is easy. All we have to do is open the side door of the garage and let her go into her side yard. She leaps around with wild excitement like Snoopy in a Peanuts cartoon. Then she recognizes that it’s cold out there, takes care of necessary business, and is happy to return to her spot on the couch. Wild enthusiasm is followed by a two hour nap!

Having flashbacks to the Blizzard of ’78. There was a State of Emergency then as well. Unfortunately, not soon enough for the hundreds of people trapped in cars on highways.
We were some of the fortunate ones. We were safe at home. Betsy was only two weeks old. Dydee Diaper Service was considered an emergency vehicle. I’ll never forget the driver climbing over a snowbank, looking like Santa Clause with a sack on his back.

The wind seems to be picking up out there. Better post this before we run out of luck on the power thing. Hoping that everyone is safe out there.